Getting Started with Covers 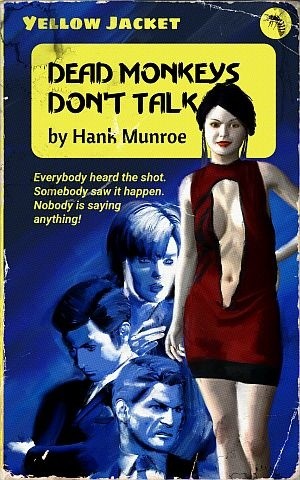 FOR MOST OF US, when we think of pulp literature, we think of two things: the covers and the content.

Before we can talk about either, we need to clarify a little what it is that we are talking about. Pulp was a term first applied to the pulp magazines of the early twentieth century, whose covers, on a broader canvas than the paperback, were colourful, lurid, and sensational. These are not my main target here. Instead, I’m interested in their spiritual successor: the cheap pocket paperback. A smaller, narrower canvas created different demands from artists, but because they were selling a single novel (usually) rather than a collection of stories, the on-cover text could be limited and focused.

Like many readers my age and older, I was attracted to the painted paperback of old, they were covers, with their unique aesthetic, full of promises to reader - and that is what sells books. I find many of today’s ePulp covers lacking something, though, in fairness, it is through no fault of their own.

The market for this sort of fiction today is very different from that of the past. Back then, sales would support the cost of professional cover artists, while today’s pulp publishers are working with micro-budgets. To meet the demand for budget covers, there is now a cottage industry in what are being termed ‘pre-made’ covers (or which professionals apparently prefer to term ‘ready for print’). These covers are largely created using stock photos manipulated in a photo editor, such as Photoshop, and feature fairly generic designs so as to maximize the number of books they might be suitable for. It is a scatter-shot strategy, as the designer cannot count on a return from every product, they must keep production costs and time to a minimum, so as to maximize their production output while keeping the price low enough for the customer base. This is why there is such reliance on cheap stock photos and generic designs intended to have a broad appeal, a formula that results in a marketplace of some very competent but frequently either bland and/or samey images. 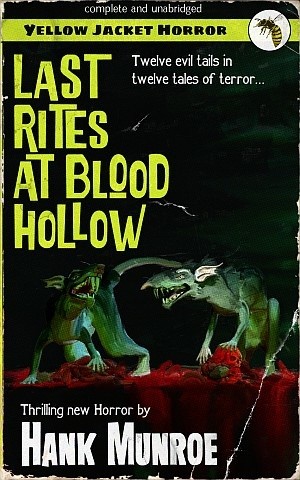 My goal here was to see if there was a way to create covers that are suggestive of those of the past, while meeting the demands of the present.

Now, full credit where it’s due. If you do a quick search for the work of Mike Fyles, you’ll no doubt discover his own pulp covers (along with some for both DC and Marvel comics) and while I’ll never claim to be able to equal the quality of his work, and while my own style is a little different, it was his method that was the foundation of my own.

While you wouldn’t guess it from looking at his work, his covers begin with stock 3D models in what I term a staging program. These programs provide a virtual stage onto which the user can introduce various props and figures, which can in turn be posed and lit as if in a photography studio. A final quality image can then be rendered, analogous to taking a photo. These programs have a bit of a mixed reputation. On the one hand, they are used by professional illustrators far more than most people realize, thanks to the artists, like Mike Fyles, using them as part of a work-flow that leaves the final product’s origin unrecognizable. On the other hand, they are very popular with hobbyists, whose work is, as you’d expect of variable quality and usually instantly recognizable in its origin. Add to that the unfortunate but predictably tasteless use that these programs can be used for in some quarters of the internet, and you have a perfect recipe for an undeserved reputation. It is what it is. 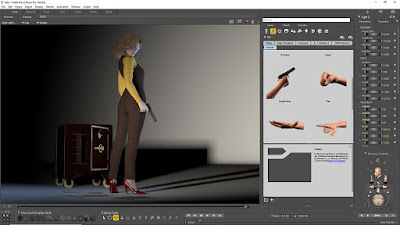 The two most popular programs of this kind are Poser, which is on version eleven and has been around for about twenty years, along with it’s younger cousin, DAZ Studio. The former costs money but comes with a lot of content and has some nice whistles and bells (and there are those who find its interface alone to be worth paying for), while the later is free but you’ll pay out for content add-ons (though, for that matter, you’ll pay for these whichever program you choose). If you want to get into this game, then try both (Poser has a free trial) and see which works best for you. I will talk about some of these programs (and others, such as Carrara) in more depth in other posts.

This said, it should not be necessary for you to use these programs, let alone purchase content for them. After all, there are very many hobbyists out there who would probably be happy to help you out, rendering simple (and you will only need very simple) images to order and licensing them from you for a reasonable fee. Just visit the forums at somewhere like DAZ or and I’m sure you’ll be able to recruit some helpers. 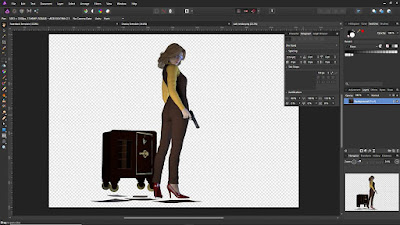 There are two programs that you are not going to be able to do without. The first of these is a photo editor, such as GIMP, Photoshop, or Affinity Photo (which is what I shall be using). You will also want some sort of art filters (if you are using a version of Photoshop, even Elements, then you will have two excellent tools, being Cutout and Dry Brush, I will be using a plug-in called Simplify from Topaz). 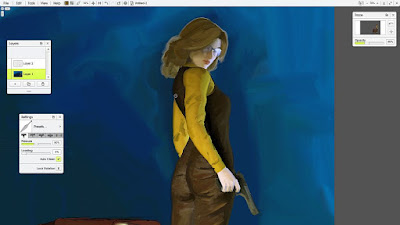 The other will be a paint program that can simulate natural media to some extent. I will be using ArtRrage, which is both affordable and very easy to use. While I find this worth the extra time and money to use, Mike Fyles doesn't leave PhotoShop and instead uses the Smudge tool with a bristle brush.

Other than the software, you are going to have to invest in some resources. I've already suggested that if you are going to use a 3D staging program, then you will need to invest in 3D models to use with it - something that can be costly. On the other hand, you may wish to commission stock images produced and licensed by others who have already made that investment. Content is something I shall review and recommend in future posts.

A resources you are going to have to obtain yourself will be fonts, to which I will dedicate my next post.
at July 14, 2018