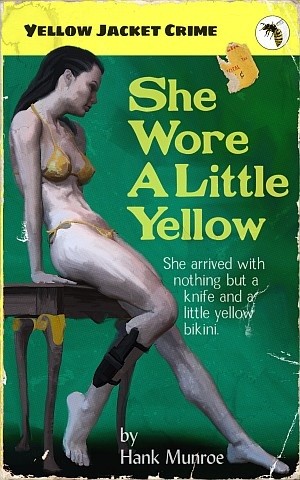 THE SCRIPTORIUM IS A FONT FOUNDRY that specializes in reproducing antique and hand drawn fonts. There are so many fonts that you’ll want to put on a book here that you could spend your savings within 10 minutes. So, stay focused and subscribe to their newsletter as they do have occasional sales.

The most cost effective way to shop with them is to buy packages of fonts - I’ve picked up a few of these since starting this project and haven’t regretted any of them.

A good place to get started is their Pulp Fonts package, which was my first purchase, and most of which was designed from pulp book cover type. Containing eight fonts, there’s a little of everything.

Area of Suspicion is the font that hooked my attention the moment I saw it and sold me this package by itself. Based on some of John D McDonald’s covers, it combines bold with angular for a note of the frantic. There are a number of letter variations to help you fit them together - and be prepared to play with the kerning and leading to get that right (the result is worth it).

Dahlgren is a bold, angular font that lends to Sci-Fi. The capitals provide an outline version.

Highball is a strong, tall but solid font that would lend well to thrillers and noir - sadly, it is one that I would recommend some caution in using. This is not because it is a bad font, far from it, but rather because it doesn’t read well in a thumbnail and the reality of on-line publishing makes that a necessity.

Ripley (as in, Tom Ripley) will likely be one of your most used fonts. It’s strong enough to hold its own for the primary text but not so strong that it can’t be used for secondary text also - I like it for the author’s name. Also, you might want to consider it for a strong tag line on the back cover.

Shayne (as in, Mike Shayne - book covers that should be top of your research list) is a super bold font that screams ‘hard-boiled’. Easily one of my favourites, there are a few nice variations of some of the letters, so experiment to get the best look for your book.

Startling Stories is based on the font of the famous pulp, Amazing Stories, so this will instantly telegraph a brand of Sci-Fi to readers.

Stonehouse is an understated little font that is one of the most used in my arsenal. It’s certainly not a title font but is one of my two go-to fonts for tag lines and blurb (the other, also from The Scriptorium) is Ascelon.

This collection of 12 fonts was sourced from posters of the 80s and 90s but most of them fit the pocket paperback rather nicely - and some of them are just perfect for the project. .

Ascelon is one I’ve mentioned before and is one of my two go-to fonts for tag lines and so one the most used in my collection.

Bilitis is a rather nice little brush stroke front that is solid enough to work for a thriller.

Cosmic Dude is close to being a tad too broad but it could be the right choice for the right title.

Dromon is a nice solid font with sinister angles.

Duccatus is spooky without being too comic book.

Eglantine is a bit of an odd fish but once put to work, does a nice job.

Ekberg is another odd fish and is also included in the Retro Futurist Package, which I think is a better fit.

Fortinbras is one of the three surprise gems. This is a great thriller font.

Hamilton is the second of the surprise gems. It has some kooky letter shapes here and there which I think look rather good.

Jambon is the third of those gems and like Fortinbras, it’s a solid thriller font.

Oblivion has a crazy, frantic look that really needs a crazy frantic bit of art to work with.

Squiffy is the only one I can’t really make work for this project - I dare say I’ll find a use but in the meantime, 11 out of 12 is a good haul for a package deal.

At $59 they work out to less than $5 each
You can find the product page here.

A package of 8 fonts that will work a treat for those retro Sci-Fi stories.

Bathysphere is rounded, almost bubbly, but very easy to read.

Belsize and Treadway and both script fonts that could have a very broad use beyond Sci-Fi.

Ekberg I've mentioned before in the Modern package, it has rounded characters that are both clear and attractive.

Gods of Mars is based on an edition of Edgar Rice Burroughs' John Carter of Mars books, so a perfect fit for this project.

Starliner is another deco Sci-Fi font in a similar vein as Altaira.

Yancy is an odd fish that just works in this context. However, this is one that I find hard to read in thumbnails, so I would exercise a little caution.

The package is $59, which represents good value just for premium inclusions (Altaira, Bathysphere, Gods of Mars, and Starliner). You can find the product page here.
at July 15, 2018